The rock volume and the available underground excavations are divided between the experiments performed in Äspö HRL. It is essential that the experiment sites are allocated so that interference between different experiments is minimised. 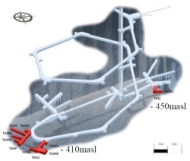 In the project Expansion of Äspö HRL (Hard Rock Laboratory) 2011-2012, tunnels were excavated to provide new experiment sites for continued technology development in full scale under realistic conditions. The expansion of Äspö HRL was mainly carried out at -410 masl, but also at -450 masl. A total of 308 m of tunnels were excavated using drill and blast, consisting of three access tunnels and eight experiment tunnels.

All the tunnels were grouted with low-pH cement, except the tunnels TAS04, TAS05 and TAS06. 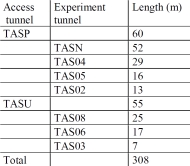 All tunnels were geologically mapped concerning bedrock types and fracturing as well as deformation zones using the new SKB tunnel mapping system RoCS. The rock surface, walls and roof, were photographed using photogrammetry, hence the dimensions of the tunnel are available in digital form in 3D.

The background hydraulic conductivity based on several boreholes in different scales is 10-8 m/s. The groundwater pressures in the area are 3625-3890 kPa (hydraulic head) based on information from the pilot drilled boreholes KA3011A01 and KA3065A01. 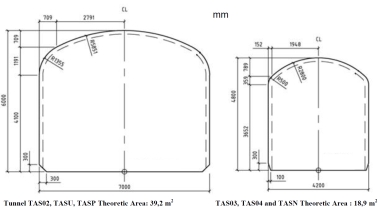 The tunnels TAS02, TAS03, TAS04 and TASN are now available and can be used by SKB’s partners.